Friday the 6th of September was the day we at Saled had all been waiting for: we officially opened our brand new, hypermodern and zero-energy headquarters on het Steenland in Bunschoten-Spakenburg, located on the Haarbrug-Zuid business park. Alongside friends, family, customers and business acquaintances, we had a grand opening and festivities that lasted all day long.


Festivities
The grand opening started at ten in the morning. Contractors and representatives from municipalities and consultancy firms stemming from the world of public lighting were all warmly greeted by Saled liason Arie Lengkeek, after which Lengkeek, along with sales direction Stef de Graaf, looked back at the early years of Saled. They brought the crowd along with them on a (summarized) journey through the past ten years of the company.

After this, voice-actor Niek Boes had the guests experience light in his unique own way. Using his voice, he mimicked TL-tubes, steam trains, fast cars and jet fighters amongst a wide variety of other vehicles and sources of light. His spectacular and interactive show did not only get the crowd smiling and laughing out loud, but it was also deemed very impressive by many. After the show it was time for a tour around the new headquarters. While enjoying the variety of drinks and appetizers available, guests could observe and admire the newest lighting additions to the Saled arsenal from up close. In the meantime, a barista served coffee, espresso and cappuccino, and this was greatly enjoyed by the guests. 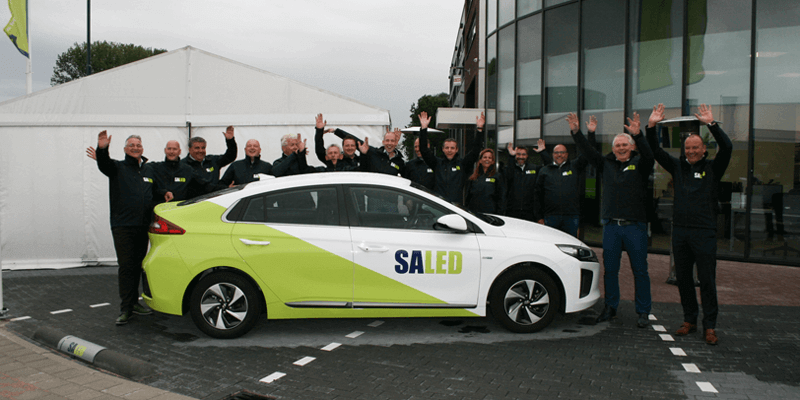 In the afternoon, customers en business acquaintances from the utility branch were invited to experience the same program as the people in the morning did. It was great to see many familiar faces and happy customers as they enjoyed the tour. Once again, the performance by Nick Boes was a great success.
Around six in the afternoon, the fire grills were lit and a food truck entered company grounds to serve people with a all sorts of delicacies. After this, family, friends and acquaintances of Saled employees were invited to step inside and take a look around the new headquarters. Beautiful gifts were exchanged and the DJ made sure everyone got into the mood to dance and have a good time.

Word of appreciation
We at Saled want to thank everyone that showed up and celebrated with us during this festive day. Thanks to you it was a great success and a day we will not forget anytime soon. If you were not able to make it to the opening, do not worry. We made a short video so you can have a taste of what it was like on the 6th!

We use cookies and comparable techniques to ensure that we give you the best experience on our website. These cookies are used by us and third parties to track your visit to our website. With these techniques we display advertisements based on your interests and behavior. It also allows you to share information via social media. If you proceed on our website, we will assume that you agree with this.OkRead more